The internet and social media are powerful tools for elected officials. Most importantly, they can be used to reach out and connect with constituents. But they can also be incredibly harmful – especially to women and girls.

Online attacks and harassment continue to grow in frequency and intensity. They often even reach levels of physical violence. The Federation of Canadian Municipalities (FCM) has committed to opposing this harassment. The goal is to foster an environment that allows everyone to thrive.

The reality is that intimidation, harassment, and online violence often put off talented people from running for office. It also contributes to some elected officials prematurely choosing to step way.

This is why FCM CEO Carole Saab recently moderated a panel discussion on online harassment. The panel took place during the 2021 FCM virtual conference. Saab led a conversation around how to build upon the work of many stakeholders. These groups strive to increase the number of women in leadership and decision-making roles. She also asked how these same women can be supported once they are in these positions.

“We collectively need to ensure that we take decisive steps to protect and empower women and girls everywhere from gender-based violence, including through online harassment,” Saab said. “To the women and girls, racialized, LGBTQ candidates across the country, run. Run for office. Your voice is needed. You have a world of champions behind you and we’re going to work very hard to have your back.”

Price to Pay for the Future

MP Maryam Monsef, Minister for Women and Gender Equality, agreed that online harassment is a deterrent to public service. This is particularly true for women who are young, Black, Indigenous, racialized, have disabilities, or are members of the LGBTQ+ community.

Monsef recalls becoming the first woman to represent her riding of Peterborough–Kawartha. She was also the first Muslim to be around the federal cabinet table. But it all came with a price. And part of the price Monsef pays is in the vitriol she sees online. That price isn’t paid by her alone. Monself said her own niece – who spends a lot of time online just like thousands of girls across the country this past year – will come across hateful comments said by anonymous trolls.

And that, she explained, affects those kids. Not only in the moment, but in the future as well.

“It tells them not to put up their hand in the classroom. Not to put themselves out there. Not to take on leadership roles. And you know what, Canada can do better than that,” Monsef said. “We have an obligation to make sure we do everything we can to protect hard-won freedoms and our charter rights. But also, to ensure that this new digital economy of ours is safe for everyone. That it does not hinder the participation of those who have been hardest hit by COVID. We need their help in the build back better.”

Maude Laberge is mayor of Sainte-Martine, Quebec. She knows the online harassment many women experience is not new. But, and especially during the pandemic, it has exponentially increased.

Laberge, who is also chair of the Women and Governance Commission of the Union des Municipalités du Québec, said some members have had to face death threats. It is important for everyone to denounce this type of behaviour, she said. This is true, no matter someone’s gender. Even so, Laberge said statistics show violence against women is often more intense than that against men. There is even some belief, she added, that the amount of online harassment is 27 percent higher than what is documented in Quebec.

Christopher Tenove knows the statistics rather well. After all, he is a Postdoctoral Fellow at the University of British Columbia. Tenove and his colleagues are researching the extent and the consequences of online abuse that politicians are facing.

Tenove interviewed more than 30 candidates and staff in their research. They also looked at more than one million tweets. Among the findings, there is a lot of toxic content that people face, especially in the heat of a campaign. All together, something like 40 percent of it ranges from being unpleasant to hostile. Comparatively, about seven percent is positive.

The vast majority of the attacks online are against a small number of more prominent people. So, in terms of volume, a lot of people thinking about running for office are not going to be facing a flood. They will be “more facing a trickle,” Tenove said.

“It’s important to know that you’re not going to all get the experience of a Minister Monsef or a Minister McKenna [Ottawa Centre MP Catherine McKenna]. For some, it is more manageable and less of a problem,” he said. “That’s worth saying. We want to balance addressing this critical issue without intimidating and frightening people from wanting to participate publicly.”

Address Harassment, Don’t Hide From It

Another point Tenove’s study showed is that women and racialized candidates didn’t always face more frequent abuse. But the content they did face was “more bigoted, misogynist, perhaps Islamophobic.” This had a real impact, because it echoed people’s experiences offline. It amplified those experiences and contributed to the obstacles they faced to running for office. Or for being in office altogether.

Bystanders Must Speak Out

Monsef said that the first thing women can do to address harassment is to place their name on a ballot. There’s backlash, she said, to every single step forward women have made. A backlash came when women entered the workforce, and when they got the right to vote. Monsef said that this hate is rooted in misogyny, sexism, and racism.
One part of the solution is making sure that bystanders aren’t silent online. Monsef said women must work together with their allies to say enough, no more. This is a part of the answer. But she also said that women can’t do this alone.

“Ultimately online violence, just like any form of gender-based violence, is a reflection of what we’re willing to tolerate in society,” Monsef said. “And so, the more our constituents, our communities, Canadians, and little ones are having this conversation, the more we’re able to unite our efforts, the better off we’ll be. And the bigger the impact will be.”

Laberge said that there are two things required to change the issue of online harassment. There needs to be more positive talk about municipal politics. Most women who are involved in politics, Laberge said, have positive experiences and have worked to create change. It is important for young women to see positive role models. Secondly, women that have succeeded must speak out, explain how to work within systems, and convince other women to become involved.

Time to Face Hate Head On

Monsef agreed that it’s not all women who will have these deeply negative experiences. But when they do, they’re much more difficult than what men go through.

For those who sit around decision-making tables, Monsef said they have an added responsibly to stand up.

“I’ve certainly benefited from that kind of mentorship and championing. Let them know that it’s going to be hard, but that it’s worth it. And that you got their back,” Monsef said. “We get to be that generation of leaders who put forward a system of supports and prevention efforts that matter. So let’s seize it. Let’s make sure we don’t lose this opportunity. And that we don’t lose the caliber of talented individuals whose expertise we’re going to need to build a stronger Canada.”  MW

✯ Municipal World Insider and Executive Members: You might also be interested in Teri McMackin’s article: Opening the door for women in local government. Note that you can now access the complete collection of past articles (and more) from your membership dashboard. 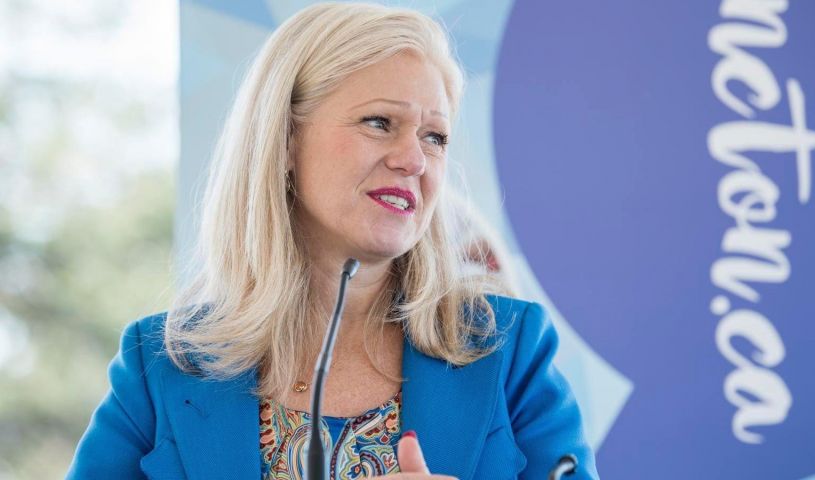