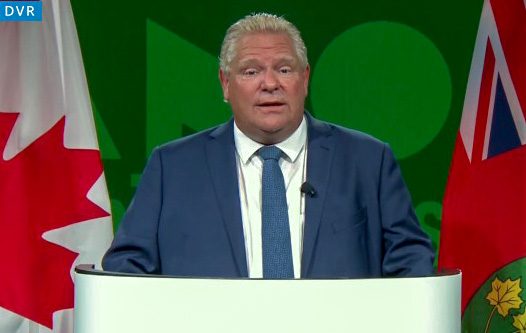 Federal politicians are currently in election mode. But Ontario Premier Doug Ford was quick to follow their example with a stump-style speech of his own.

The Association of Municipalities of Ontario (AMO) 2021 virtual conference kicked off on Aug. 16. In his comments, Premier Ford celebrated the efforts of municipalities. In particular, he focused on how local governments have overcome many pandemic-related obstacles.

The Premier said the COVID-19 has tested municipalities like never before. The virus has affected every part of Ontarians lives, he said. But it is at the local level where the impacts have been most severe. Even so, Premier Ford said local leaders have been up to the task.

“Nothing fills me with more pride than seeing how this province responded when called upon … we saw the best of the Ontario spirit, undaunted, unwavering, and unbreakable,” Premier Ford said.

Premier Ford lauded the 19.95 million doses of vaccine that have been distributed across Ontario. He also thanked the nearly 9.4 million Ontarians who are fully vaccinated for doing their part to battle the pandemic.

His thoughts were echoed by Minister of Municipal Affairs and Housing Steve Clark. Clark also took to the virtual stage to address AMO 2021 delegates. Like the Premier, he celebrated local government efforts.

“We have navigated through uncharted territory with COVID-19. We have worked closely with all of you, our municipal leaders, and I want to thank you for your continued efforts,” Clark said. “Together, we will get through this.”

Premier Ford reminded delegates “COVID will be something we live with for a while longer.” While the province has been able to deliver “a record number of vaccines,” the Premier said he will also fortify hospital capacity. To do this, he added, Ontario will make “long overdue investments” in local communities.”

Premier Ford highlighted investments in new hospital projects in Windsor, Brampton, and Quinte. These “state-of-the-art facilities,” he said, will serve these communities for decades to come.

These efforts, Premier Ford said, are at the center of provincial efforts to strengthen the healthcare system. This includes making long overdue investments in our long-term care sector.

“After decades of neglect, this government is banking the largest investment in provincial history and delivering 30,000 new and upgraded long-term care beds all across Ontario,” he said. “This will make Ontario the leader in resident care in Canada. From our older citizens to our youngest, we’re focused on the health and wellbeing of every Ontarian.”

That second point led the Premier to focus on the province’s education system. Premier Ford said Ontario’s education system will receive the support it needs to deal with the pandemic. He said that includes making an over $2 billion investment in added resources. This includes more than $1.6 billion for a safe return to school this September.

The Premier also said the province is taking further action to optimize air quality in Ontario schools, including plans to deploy an extra 20,000 standalone HEPA filter units into learning spaces.

Solving the healthcare crisis, Premier Ford said, must always be the number one priority. After all, there can’t be a healthy economy without healthy people. And healthy economies produce strong resilient communities.

To that end, the Premier also lauded what he described as “historic infrastructure investments.” This will support the approximately 1.4 million Ontarians who continue to be without access to reliable high-speed internet.

“This isn’t just a small-town issue, or a rural issue, or remote issue, or a northern issue. It’s an all-Ontario issue,” Premier Ford said. “That is why this government is investing nearly $4 billion to connect to every Ontarian to unserved and underserved parts of the province by the end of 2025. This is the largest single investment in broadband by any provincial government in Canadian history.”

The Premier highlighted other election-style supports, including partnering with the federal government to provide up to $2.15 billion in funding to assist Ontario municipal transit systems with COVID-19 related pressures. He also called for expanding the GO transit rail network and lauded spending up to $44 million to deliver local and intercommunity transportation projects in 38 underserved municipalities.

Clark was quick to say all levels of government have worked hard to respond to the pandemic. But he also called out Ottawa for the fact the Ford government believes it isn’t getting its “fair share” from Ottawa.

Ontario, Clark said, should be receiving $490 million more from Ottawa based on its level of housing needs. And the $765 million in social services relief funding that has not been fully matched by Ottawa.

He also said Queen’s Park remains committed to supporting Ontarians. This includes the province’s commitment of almost $1.1 billion in transfer payments. These would support housing and homelessness programs in 2022/2023.

Clark thanked AMO, and the conference delegates for their efforts during the pandemic. He sited several examples, including shifting to electronic council meetings, redeploying staff to critical municipal services, and working with local public health units to support the vaccine roll out.

The Minister called them all champions, and examples of “the true Ontario spirit.”

His words were echoed by the Premier. He also added his commitment to continuing to work with municipalities. This goes for both overcoming the pandemic issues of today, but also in planning for the province’s inevitable recovery.

“We have overcome so many obstacles and achieved incredible success in the face of extreme adversity. We did this by working together as team Ontario,” Premier Ford said. “There’s much work left to be done, but there’s no better team than this one. We can handle whatever comes our way as long as we work together.” MW

Net zero is a necessity