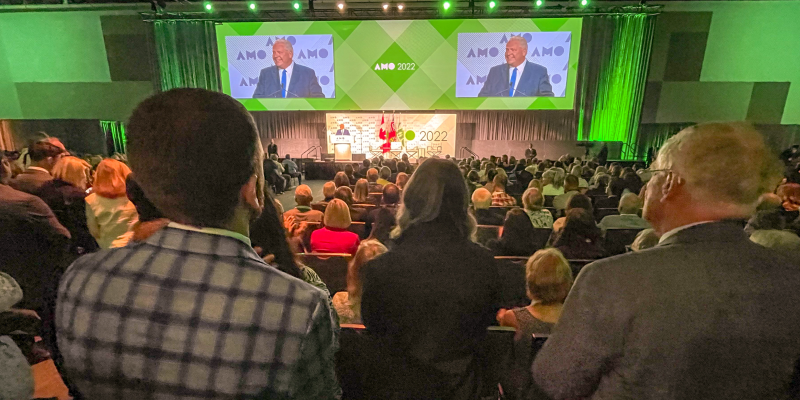 After a two-year hiatus from in-person gatherings, some 2,000 municipal leaders from across Ontario gathered in Ottawa on August 14-17.

For AMO Executive Director Brian Rosborough, this year was his first opportunity to oversee an in-person event. Rosborough took over as executive director during the 2019 conference – the last in-person event before the pandemic.

“I think there’s a real pent up demand for people to have that opportunity to network and connect, meet up with old friends and make new friends, to have an opportunity to meet with provincial officials and others that really can’t be fully substituted virtually,” Rosborough said. “While the virtual experience was a good one, and really allowed us to innovate in some ways, getting back together, there’s really no substitute for in person.”

The conference began mid-afternoon on August 14 with the opening of the trade show. The full program opened the following morning with an opening keynote from Dr. Samantha Nutt, founder of War Child USA and Canada. Also an assistant professor at the University of Toronto, Nutt addressed delegates on building better communities through principled leadership.

Following the keynote were comments from Ontario Premier Doug Ford and Ontario Regional Chief Glen Hare. This was followed by then-AMO president, and current Parry Sound mayor, Jamie McGarvey. McGarvey announced Pat Vanini as the latest addition to the AMO Honour Roll Award. Vanini was the former AMO executive director, who retired from the position in 2019.

Vanini was on-hand to accept her inclusion in the Honour Roll. She also thanked both McGarvey for his introduction (and recap of her substantial career achievements) and the delegates for contributing to the strengthening of communities across Ontario. She also provided a “bumper sticker” of advice to the delegates: “For me, success is rising above disagreements. And if you give respect, you’ll receive respect. So think about that one.”

A highlight of the afternoon session was the presentation of the Canada Community-Building Fund (CCBF) Awards. The awards were presented by Jennifer O’Connell, Parliamentary Secretary to the Minister of Intergovernmental Affairs, Infrastructure and Communities.

As a permanent source of funding for provinces and territories, O’Connell said CCBF funding provides municipalities with tools to support local infrastructure priorities. Each year, the fund delivers over $2 billion to 3,600 communities across the country. That is in support of approximately 4,000 projects annually.

“Recognition of these initiatives is crucial to our collective effort to bring innovation and inspiration to infrastructure projects across Ontario and across Canada,” O’Connell said. “These projects are making a difference in our communities and the government of Canada is proud to have played a role in making that happen.”

The afternoon wrapped up with a series of concurrent sessions. The topics of these conversations included integrated mental health and addiction approaches; creating diverse, equitable, and inclusive communities; and climate change impacts on municipal infrastructure.

The last full day of the conference kicked off with a series of breakfast discussions. One of those sessions featured insights on local youth engagement from AMO’s Youth Fellows – Juvairiyya Hanslod, Terran Morris, and Hale Mahon.

The morning featured comments from Taneen Rudyk, President of the Federation of Canadian Municipalities, and Mike Schreiner, leader of the Green Party of Ontario.

The highlight of the morning was the presentation of the PJ Marshall Awards. The award recognizes Ontario municipalities that have implemented innovative ways of providing public services and facilities.

“I believe that all innovation is local. When we can showcase innovation that’s occurring in municipalities, and share that knowledge, highlight what’s going on, that’s an important job for us to do,” Rosborough said. “The local innovation is quite remarkable in Ontario. In the last four years, we’ve had considerable additional funding from the province specifically to support and foster municipal innovation. And that’s a good investment of provincial funds to help kickstart projects locally.”

The end of day three was highlighted by the AMO board election for 2022-2024. Among the results, McGarvey moved on to the role of past-president while Halton Region Councillor Colin Best was acclaimed to the position of AMO president.

In addressing this year’s return to in-person conferencing, Best lauded the excellence of the entire event. He also welcomed the opportunity to see a lot of familiar faces for the first time in three years. And while he enjoyed meeting some people for the first time, he also said he appreciated seeing others for a final time.

“I’m meeting a lots of new delegates and also seeing goodbye to them. For a lot of councillors and mayors, this is their last conference,” he said. “I really appreciate the service because this has been the biggest challenge that municipal councils have had in almost a century. This is similar to what councils went through in the depression and the previous flu epidemic of 1920. So we learned a lot of things and hoped to learn more as we recover.”

Best acknowledged he was taking on his new role at a “very challenging time.” That said, he is looking forward to leading some essential conversations. Best said there are challenges common to all municipalities. Besides the ongoing pandemic recovery, municipalities are facing unprecedented challenges in several areas. These include health care, mental health, drug addiction, and homelessness.

While municipalities – regardless of size or location – are all facing similar obstacles, they will often need different solutions.

“What works in Toronto may not work in Kenora. We have to highlight that we have different challenges. A lot of municipalities, many of them only have three or four employees. So, we have to work out, ‘Okay, what’s the best thing to do?’” Best said. “And we deliver a lot of provincial services in terms of the housing, health care, long-term care, and other services. And we have to work out not only for single-tier, but also two-tier systems, too.”

While there are a seemingly endless number of obstacles, Best did also address municipal opportunities. This, he said, starts with “a lot of economic development.” This can help, he said, in creating more balanced communities that can deliver sustainability, as well as the economic growth.

As Best said, “We want to have a thriving province so we need to have thriving municipalities.”

The final day of the conference wrapped up with an economic recovery panel, hosted by Steve Paikin, host of TVO’s The Agenda. The panel – which included Minister of Finance Peter Bethlenfalvy, policy analyst Dr. Mike Moffatt, and economist Armine Yalnizyan – explored what economic recovery might look like for Ontario.

The conference closed with remarks from London Mayor Ed Holder as the “Forest City” will be hosting the AMO conference in 2023.  MW 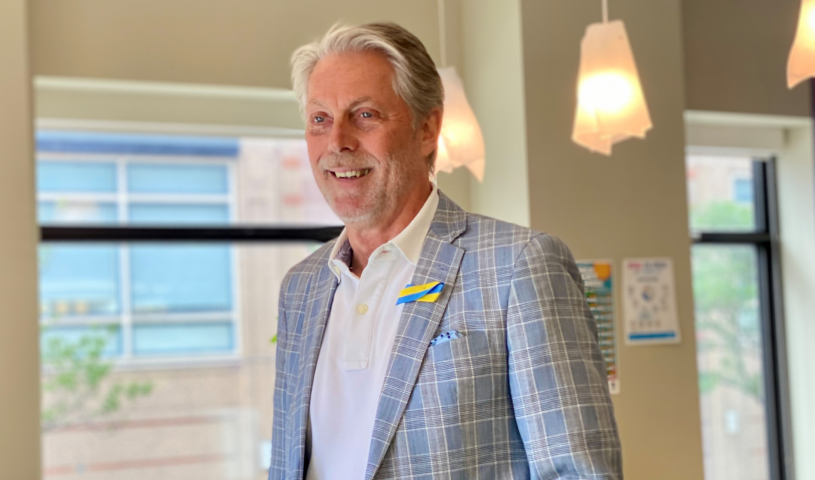