A victory for municipal rights in Ontario

by Ted Comiskey
in Environment

In July 2020, the Ontario Government passed new legislation that gave municipalities the right to approve new landfills in their communities. It was the result of a three-year campaign led by the Town of Ingersoll to add a new layer of approval to Ontario’s environmental assessment process for landfills. Now, every municipality in the province has the right to choose if they want to host a landfill site.

The impact of landfills cross municipal boundaries: traffic, air pollution, dust, and watershed concerns. The new legislation lets municipalities choose how they want that landfill to be developed and operated, giving equal powers of approval to any municipality that is within 3.5 kilometres of a proposed site.

It is quite a victory for municipal rights in Ontario – a right that many elected officials assumed they already had. Elected officials approve drive-throughs, changes in land use, and whether a Tim Horton’s can open on a street corner. But they didn’t have the right to approve a new landfill coming to their town or region.

The Rules of the Game

In 2010, a representative of a waste management company proposed to develop a nearby quarry into a 17-million tonne landfill site. However, the meeting was only a courtesy call.

The Township of Zorra – where the project would be based – did not have any approval rights over the project. Neither did the Town of Ingersoll or the Township of Southwest Oxford – both of which had residential communities within a few hundred metres of the proposed landfill pit. Only after the environmental assessment was approved by the province would the host municipality need to approve a re-zoning application, a rather straightforward process since the site was already zoned for industrial purposes.

The waste management proponent drove the environmental assessment process, and while the company was going to establish a Public Liaison Committee (as required by the legislation at the time), local municipalities were only given observer status. As a newly elected mayor of a town that would be directly impacted by the project, I was gobsmacked. Ingersoll Town Council and the town’s senior administration team were all determined to find a solution.

The community was well-organized against the project and had sent thousands of letters to the Minister of the Environment and local MPP Ernie Hardeman, who has been a champion for the community. But within weeks, it became clear that the proponent had all the cards, and that the existing, decades-old legislative framework would be challenging to fight, to say the least.

The rules of the game were against us. The only choice was to change the rules. If the Town of Ingersoll had this problem, then every municipality had this problem too. So, the Demand the Right Coalition of Ontario Municipalities was established, beginning with the municipalities in Oxford County (Zorra, Ingersoll, South-West Oxford, Tillsonburg, and Woodstock). The coalition’s goal was to have municipalities across the province pass a resolution demanding that the Minister of the Environment act and give communities the right to say yes or no to new landfill projects.

That was in 2017. Slowly but surely, other municipalities joined.

The coalition presented its Demand the Right case to dozens of municipalities across the province, answering questions of elected officials and holding special events at the annual conferences of the Association of Municipalities of Ontario (AMO) and the Rural Ontario Municipalities Association (ROMA). At these conferences, we met a lot of elected officials who had no idea that municipalities did not have approval authority over landfill projects. Three years later, the coalition had the support of over 150 municipalities, large and small, covering every corner of Ontario, including: Ottawa, Thunder Bay, Hamilton, Peel, and Durham Region. The Government of Ontario was starting to take notice.

A public affairs firm designed and managed the campaign, keeping elected officials and civil servants advised of the coalition’s progress. During the 2017 provincial election campaign, the coalition even won the support of party leaders Doug Ford and Andrea Horwath. They publicly agreed that municipalities needed a voice at the table. Oxford MPP, Ernie Hardeman, even brought a private members’ bill on the issue to second reading, but that bill died on the order paper when the 2017 provincial election began.

The waste management industry was surprised to see the legislation introduced and passed to second reading. In response, they tried to eliminate the adjacency provision in the hope that they could deny neighbouring impacted municipalities and make it easier to get their projects approved.

The adjacency issue was contentious. It might seem unpalatable that a neighbouring municipality has approval rights on a project within the next community’s jurisdiction (even though there are numerous examples where this exists, such as some planning examples). But landfills are not manufacturing operations or shopping malls. The environmental footprint of landfills is large and extend well beyond the borders of their operations.

The industry fought hard to prevent the Bill 197 from passing. They framed the bill as the end of new landfills in Ontario and pointed to data that showed that current landfill capacity would run out in 10 years. When that message failed, they followed the coalition’s strategy and began promoting the passing of motions at municipal councils – this time to have the adjacency provision removed. While a couple of municipalities did pass such motions, the industry’s efforts to scuttle the legislation have, so far, failed to gain much traction. 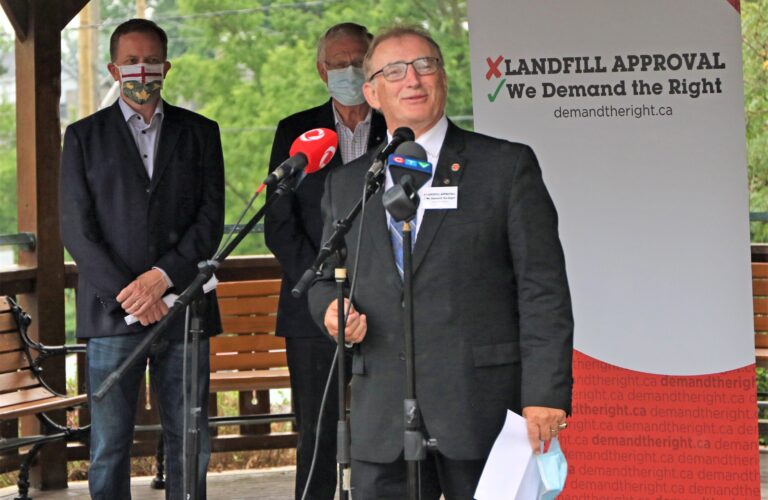 July 16, 2020 – Ingersoll Mayor and Demand the Right Chair Ted Comiskey celebrates the passing of Ontario’s Bill 197 Section 6, providing municipalities with the right to approve new landfills in their communities (and those within 3.5 kilometres of their borders). He was joined by then Ontario Minister of the Environment, Conservation and Parks Jeff Yurek, and Oxford MPP Ernie Hardeman.

The local approval legislation will foster innovation in how the private sector manages waste. For Ingersoll, the proposed landfill was to be for industrial, commercial, and institutional (ICI) waste. Currently, only 20 percent of the waste from this sector is recycled. There is room for improvement. And, if local approval rights mean higher tipping fees for municipalities, increased environmental protections, or other increases in the cost of managing waste, that can only be seen as further incentives for the waste management industry and its customers to innovate rather than relying on the oldest solution to garbage on the planet: burying it.

The landfill proponent has officially announced that the project is no longer going forward. The owner of the quarry was also convinced to back away from any further plans to develop the site into a landfill.

The road to earning municipal approval rights and then acting on them has been a long one. Some thought we would not be successful. In the end, we have demonstrated that if municipalities work together on specific issues of joint concern, we can create change for the benefit of all.

This success does not mean the end of new landfills in Ontario (as the industry trumpets). What it does mean is that Ontario’s waste management industry now must face the reality that social license is embedded in legislation. Every new proposal must begin and end with discussions with municipal leaders who act in the best interests of their residents.

Our own polling indicates that one in four municipalities would entertain hosting new landfills, if they were on a level playing field with the proponents. Now they are.  MW

Ted Comiskey is the Mayor of Ingersoll and the Chair of the 150 member Demand the Right Coalition of Ontario Municipalities.

Presented by Federation of Canadian Municipalities
in Environment, Infrastructure