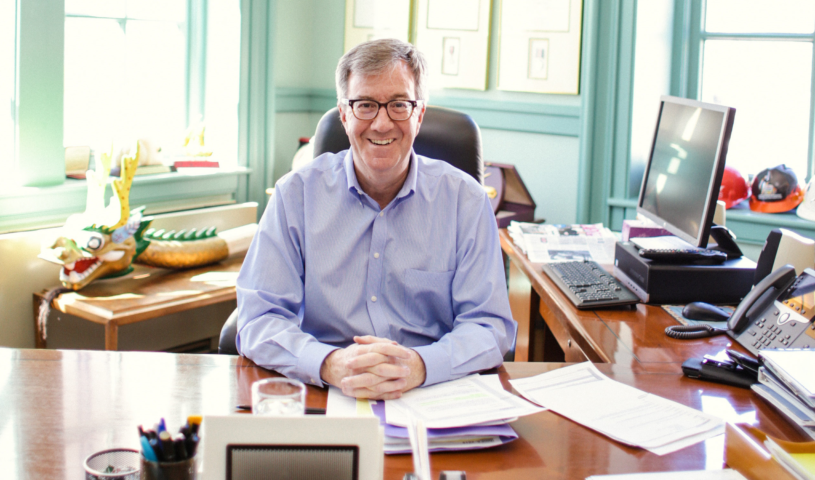 Back on election night in 2018, Jim Watson had a reason to celebrate. As the results came in, it became clear very early that he had been re-elected as Ottawa’s mayor for a third consecutive term. But even while he was thanking his supporters, he was coming to another conclusion – there wouldn’t be a fourth term.

Having turned 60, and coming up on his 15th year as mayor, Watson said that he knew it was time for a change. Watson said that he is “very comfortable” with his decision to step away from the public spotlight. In every election he ran in, Watson set out many clear campaign commitments. He’s proud to have been able to live up to them.

“I try to under-promise and over-deliver as opposed to the opposite, which some people in politics end up doing. I’m very proud of what we’ve been able to accomplish,” Watson said. “I sent out a news release outlining some of the issue that I’m proud of. They’re all meant to live up to the Lord Baden-Powell expression of always leave the campsite in better shape than you found it. I believe in the same philosophy of leaving our city in a better place than we found it.”

Since Watson’s announcement he has allowed himself a bit of introspection. He looks at many of the city’s accomplishments during his tenure with a sense of pride. But he is also quick to say that he wasn’t solely responsible for getting those projects across the finish line.

The team approach is one that Watson has always strived for. Watson has always been eager to collaborate with other members of council, the community, and city staff. He is quick to acknowledge that they all played key roles in the growth that Ottawa has enjoyed.

Something that immediately comes to mind for Watson is the city’s focus on economic development. This, he explains, is the key to the well-being of the community. To have a healthy city, Watson said that it needs a healthy small business community. This need has become essential during the pandemic. One of the things Watson is eager to celebrate is the city’s commitment to reduce small business taxes. That tax rate will drop by 15 percent, beginning this year.

It would be disingenuous to discuss Ottawa’s progress without discussing the sometimes-controversial O-Train. The light rail system (LRT), Watson said, has “obviously” faced some challenges. But, with new management and months of “real solid service,” he sees an exciting future for the system. The city is building out the LRT’s second phase to expand out farther east, west, and south.

Watson was also pleased to hear that the federal government will be helping fund phase three of the LRT. This will eventually allow expansion of the system into suburbs such as Kanata, Stittsville, and Barrhaven.

“It’s been a whirlwind of activity that’s for sure. I very much am not one of these politicians who just likes to talk and debate things ad nauseum. I like to see shovels in the ground, get projects underway,” Watson said. “A lot of these projects were stuck in the mud for decades. The need to revitalize Lansdowne Park. The need for a new art gallery. The need for an innovation center, similar to Waterloo and MaRS (Discovery District) in Toronto. It’s quite exciting to see how the city has grown.”

Watson’s political experience is extensive to say the least. Besides serving as mayor (as well as being mayor and a city councillor in the former City of Ottawa before its 2001 amalgamation), Watson has worn many other hats. He served as president and CEO of the Canadian Tourism Commission. He was also a MPP and cabinet minister. While in Queen’s Park, he served – among other portfolios – as Minister of Municipal Affairs.

But through it all, it is the municipal sector that has been Watson’s favourite. In Ottawa, that has meant much-needed affordable housing units and new bridges to better connect the community. It has also led to a tangible sense of progress.

“It’s the most pragmatic level of government. It’s not a lot of hot air and debate and points of order and filibusters. It’s getting the job done,” Watson said. “People often ask me, what’s your favourite level of government? Which job did you like to best? And I said, hands down, it’s municipal. You can actually get stuff done.”

Watson sees local government today as the destination for many people moving into politics. In the past, the municipal scene was a steppingstone into the federal or provincial realm. In recent years, the opposite has been happening.

There are many political veterans who began their careers at other orders before coming to the municipal sector. Watson points to mayors such as Bonnie Crombie (Mississauga), Mike Savage (Halifax), Kennedy Stewart (Vancouver), Kathryn McGarry (Cambridge), and Ed Holder (London) as examples.

“People realize that this is where the action is,” Watson said. “If you’re going to fight climate change, build more affordable housing, it can really be done in partnership with the other orders of government. But the lead being the municipal government. We have a can-do attitude.”

Given Watson’s background, it is no surprise that people have occasionally reached out for his advice. As someone who has seen the good and bad of local government, he is quite open in sharing his insights.

His best advice is to be honest with your platform and your promises. The public, he adds, have a low regard for politicians at the best of times. With that in mind, Watson said that it isn’t helpful to add to that cynicism by promising to be all things to all people.

Watson has put that sentiment into practice throughout his career. For example, one of the things he did to discipline Ottawa council – and himself – took place at budget time. If someone wanted to add $100,000 to the budget, they needed to take out $100,000 out from somewhere else. This way, Watson explained, the budget process doesn’t become a piling on of spending.

Watson said he believes that this allows people to recognize that there are two sides to a ledger. There is money in, and there is money out. By law, municipalities can’t run a deficit. The reality of that, Watson said, would often frustrate some of his colleagues. But it also put them in “a fiscal straight jacket.” This way, they understood that they couldn’t only be the bearer of good news by spending tax dollars.

Watson’s perspective on politics could be summed up in a statement that he attributes to former Prime Minister Paul Martin: “If you have 100 priorities, you have no priorities.” Put another way, you can’t try to be everything to everyone because it will catch up to you.

“That’s one of the reasons I’ve had some degree of success in the eight elections that I’ve won. I’ve tried to be upfront with people,” Watson said. “I’ve had more people tell me, ‘You know what, I disagree with you on this issue, but I respect the fact that you’re standing behind the decision on principle and not pandering.’ There’s way too much pandering in politics these days.”

With that in mind, Watson said that he advises candidates to keep two qualities in mind: patience and integrity. Particularly with social media in mind, he also recommends that folks develop something of a thick skin. After all, whenever a politician takes a stand, someone is going to get upset. And, as Watson knows first-hand, they will almost always let the world know about it.

No Rush for What Comes Next

The sometimes-vicious nature of politics is something that Watson won’t miss as he begins looking to what comes next.

Granted, Watson and his council colleagues are still dealing with the pandemic. And he knows it is difficult to start looking for a new job while serving as mayor. But his preference is to remain in Ottawa.

As the end of this term draws closer, Watson said that he will begin looking at what options are available to him. And if it’s not a good fit, then he’d be happy to volunteer on some community boards. He would also like to help out again at the Shepherds of Good Hope community organization. That, he said, is something he hasn’t been able to do with his mayoral schedule. And that hectic schedule, in particular, is one thing he is looking forward to getting away from.

“I enjoy trying to give back to the community that’s been so kind to me. That is going to be a part of it,” Watson said. “I also want to reconnect with a lot of friends that I’ve sort of lost touch with. I want to have the time to actually host people for dinner or cocktails at my house. Or to be going over and visiting family and friends on a more frequent basis. I look forward to that.”  MW