Canadians, get your Crokicurl on!

by Ibrahim Daair, Municipal World
in Parks and Recreation 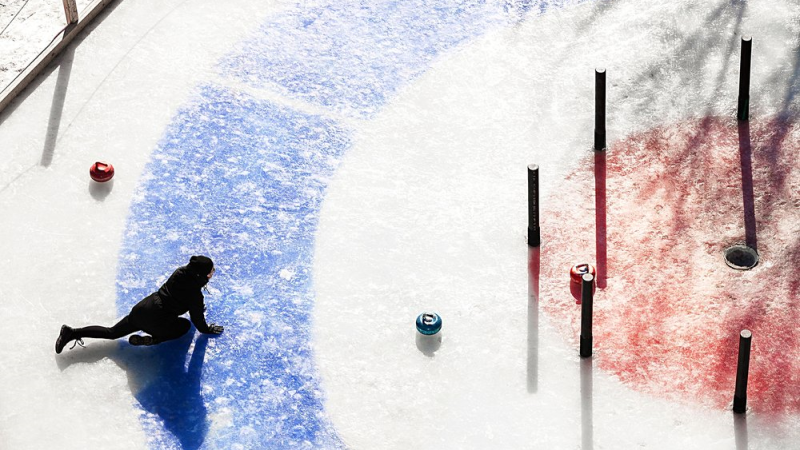 If there’s one thing Canada is known for, it’s winter. From snowboarding to ice hockey to Rolly, the 45-foot-high snowman, winter is Canada’s thing. In recent years, a new winter pastime has been taking the country by storm: Crokicurl.

Crokicurl was first created in Winnipeg back in 2017 by a duo of local landscape architects. Since then, its spread across the country. Playfields have been set up in Toronto, Regina, and Saskatoon. The game has even made its way across the border to the US.

“We’re really proud of it,” said Liz Wreford, principal landscape architect of Public City Architecture and one of the inventors of Crokicurl.

Where Does Crokicurl Come From?

Crokicurl is essentially a combination of curling and the classic board game of Crokinole. Each team takes turns throwing a rock toward the centre of the playfield. The team with the most points wins the game.

The board game likely originated sometime in the late 1800s. The earliest known crokinole board was built by Eckhardt Wettlaufer from Sebastopol, ON. Wettlaufer built the board in 1876 as a gift to his son. A typical Crokinole board is an octagonal shape about the size of a tabletop. Players take turns flicking wooden disks toward the centre of the board. The closer the disk gets to the centre, the higher a player’s score.

While Crokinole is well-known in parts of Ontario and the Prairies, it is lesser known elsewhere. “I’ve always been interested in Crokinole as this regional phenomenon,” Wreford said. “Most people have a board in their closet or basement.”

Curling has an older history. While it’s mostly associated with Canada today, curling first started in Scotland in the early 16th century. The word curling itself, first appeared in print in Scotland in 1620. In 1924, curling was included in the inaugural Winter Olympic Games held in Chamonix, France. Today, the game is a firmly established Canadian classic. The Royal Montreal Curling Club, established in 1807, is the oldest sports club still active in North America.

For those unfamiliar with curling, think of it as a kind of winter shuffleboard. Players take turns sliding a stone along the ice, aiming to get the stone as close to the centre of the target zone. The closer to the centre, the higher the score. Players can curve – or curl – the path of the stone by using a curling broom. Curlers then sweep the ice to help the stone travel farther and straighter toward the target.

While playing a game of crokinole, the team at Public City noticed how some of the rules overlap with curling. “We started having a discussion about whether anyone had ever put Crokinole and curling together,” Wreford said. “It seemed like such an obvious fit.” But after looking it up online, they couldn’t find anything quite like Crokicurl anywhere. “Sometimes those are the best ideas; the ones you think have already been done before,” said Wreford.

So, they spent a few weeks developing a set of rules for Crokicurl and figuring out how to build a rink. Wreford mentioned the idea in a meeting at Winnipeg’s Historic Forks Market. She got a call the next day saying they wanted to do it. The first Crokicurl rink went up at The Forks Market in 2017.

“It was an instant success. Everybody just loved it” said Wreford.

Crokicurl is something that anyone can play. Players split into teams of two or four. Each team has four rocks of the same colour, and each player must stay in one quadrant. The goal of the game is to get the most points by shooting a rock into the centre button. The closer a player gets to the centre, the higher their score. Each player takes turns throwing their rock. They can use their rock to knock an opponent’s out of the way. As for the name? The team considered a few variations, including “Curlinole.” But in the end, Crokicurl was the clear winner.

In 2018, Winnipeg organized the first International Crokicurl Tournaspiel, another portmanteau combining tournament and bonspiel. The Tournaspiel had to be cancelled the last two years due to COVID-19. But at Public City, they hope more communities will adopt Crokicurl. The rules and advice on setting up a rink are readily available on their website at no cost.

Residents of Maple Grove, a suburban city just outside Minneapolis, got a chance to play Crokicurl at the city’s Wonders of Winter event this year.

“[Crokicurl] seemed to be the perfect fit for our winter event,” said Chuck Stifter, Maple Grove’s Director of Parks and Recreation. “Overall, it was well received by our park users.” Maple Grove’s Crokicurl rink was the second to open in the US. The game made its American debut last year in Altoona, Wisconsin.

“Every year, more people are building and adapting it; we’ve seen some cool adaptions,” Wreford said. “It’s been such a great project to be a part of and a great way to connect with people across Canada.”  MW

Ibrahim Daair is a Staff Writer and Copy Editor at Municipal World.

Presented by Diane English
in Parks and Recreation