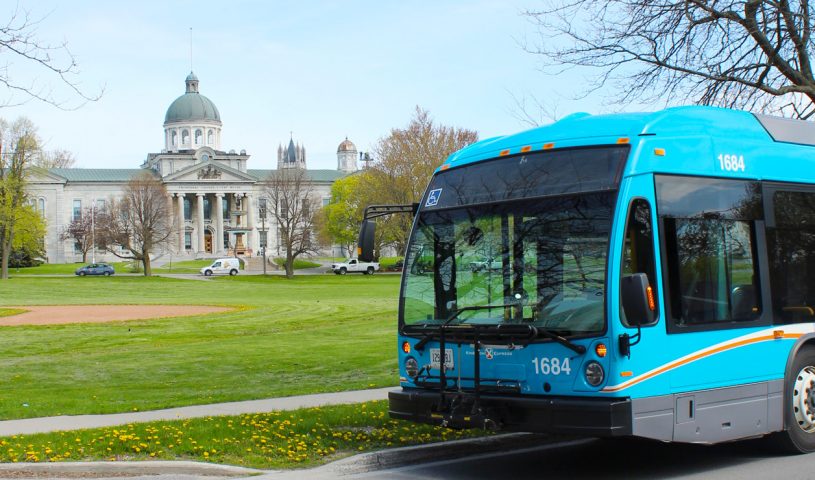 The City of Kingston was recently honoured at the 2018 Federation of Canadian Municipalities Sustainable Cities Conference held in Ottawa, in recognition of the many great strides this city has made in public transit. Kingston was also acknowledged recently by Statistics Canada as having the highest proportion of commuters using active transportation and public transit of all mid-sized Canadian metropolitan areas. From 2011-2017, the city has increased its transit ridership by 73 percent, with over six million riders in 2017. In recent years, its transit ridership has grown by over 10 percent per year (including an 18 percent increase in 2017) during a period when transit ridership in other Ontario jurisdictions had stagnated. This has been almost a decade in the making.

How was this achieved? It has been a collective effort that began three council terms ago, with an ambitious commitment to expand Kingston public transit with the phased-in addition of express routes. The current council went even further, choosing to receive a Transportation Master Plan Report, which was amended on the council floor to raise the targets for the Transit and Active Transportation Modal Share goals beyond those prescribed in the report. One critic of the original report commented that “The targets are not very aspirational!” But, council’s new targets are, indeed, aspirational – and city staff have embraced these new goals.

This is a long way from the transit system of old. Buses in the 80s and 90s were too often nearly empty. The disparaging term for them at the time was “Loser Cruisers” – only those who didn’t drive rode transit. It was, at the time, a perceived stigma to ride public transit.

Today’s transit is far different. With a new fleet, the city is also exploring electric buses for the future. Drivers are welcoming and courteous, and still have a touch of the hometown. Drivers will radio ahead at a transfer hub to say they have a transfer on the way. Drivers will wait a minute or so to accommodate riders.

The majority of express routes now operate every 10 minutes at peak, with the busiest route about to go every seven and a half minutes. And, the system is well used; often, peak time is standing room only. In addition, the ridership is, indeed, a demographic cross section of the community.

Kingston’s high ridership has been decades in the making. Many years ago, Queen’s University AMS (student government) was the first university to add a transit charge to their student fees and negotiate an annual contract with Kingston Transit. St. Lawrence College has since negotiated a similar agreement. Now, post-secondary students use their student cards as bus passes year round.

The city’s open data system lets riders download simple free apps, such as Transit, that give real time updates on arrival times and can map out available routes. The city has also added an employee discount pass program with a simple payroll deduction, and has ambitiously marketed it with employers across the city. More and more suburban citizens are now using public transit for their daily commute. A further incentive is making sure that public parking costs more than a monthly bus pass, and increasing our free Park and Rides along our main routes. Transit and parking are now managed in the same department.

Seven years ago, council approved a pilot that gave Grade 9 students free transit passes. All high school students in Kingston now receive free transit, with some financial support from the local school boards. In its pilot year, students accounted for 28,000 rides; in 2016, that number grew to over 600,000.

For students, the benefits of this program are tremendous. Too often in the past, students without transportation were not able to engage in extra-curricular activities, particularly with the cancellation of late buses by many boards of education. Similarly, an opportunity to engage in community activities or jobs was limited for many. For urban secondary students, this has tremendous benefits. As one anti-poverty community worker has said to me, “Free transit is the best youth equity policy this city has ever adopted!” Students can now seek employment year round all across Kingston.

Every September, school boards, in partnership with Kingston Transit, have a bus travel to every high school and have a bus orientation session with students, some of whom have never used transit. Their passes are issued, and they learn how to rack a bike and get tips on “bus etiquette.”

The City of Kingston has now made transit free to all those aged fourteen and under. Teachers of all grades now take classes on local field trips without needing to book school buses. (However, a call ahead is always appreciated.)

We now have a generation of children and youth learning how to get around on public transit. It’s now a normalized activity. In a generation that now values their latest smart phone or tablets over their first car, this is a very positive step toward a more sustainable future.

So, what is the cost to Kingston taxpayers? Surprisingly little, thanks to the Gas Tax Rebate dollars shared by the province and calculated on transit ridership. It is estimated to be only a net increase of 0.4 percent on our overall Transit Operating Budget. It is, indeed, a small price to pay for a robust and increasingly busy public transit system.

Kingston has had a very ambitious recruitment program for drivers. Hiring is based primarily on “people skills.” Driving can be taught, but customer service is recognized as the most critical entrance skill.

These progressive initiatives have gone a long way towards the city’s goal to becoming more sustainable. These community benefits go far beyond just transit. A double digit, annual ridership increase not only bodes well for Kingston Transit, but also for lowering the city’s carbon footprint.  MW

Jim Neill was a public high school educator for 28 years and has served on Kingston city council for 14 years, where he is currently Planning Chair. He is a community activist with an interest in environmental, housing, and anti-poverty issues. He is also a freelance writer – he co-authored for OSSTF, a nationally award winning Social Justice Curriculum Kit; Common Threads based on the Bolivian Water Crisis.

How lived experiences can help address our most pressing social challenges