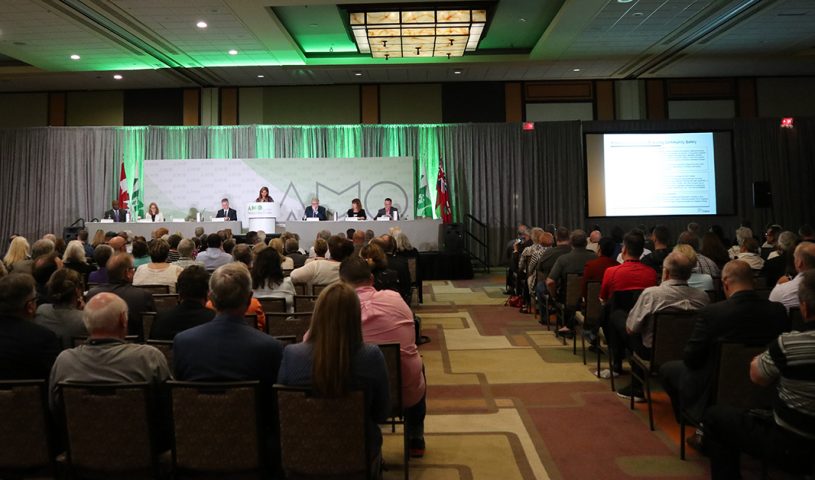 October 17, 2018. Without hyperbole, that day promises to be one of the most significant and (potentially) challenging days for all orders of government. The magnitude of changes is still becoming clear, and the ways in which municipalities need to prepare is a seemingly daunting list. And, with changes still coming down from the provincial government (such as around private sale in municipalities, the opt out provision, and what’s happening with the Smoke Free Ontario Act, to name just a few), there’s still significant work that municipalities need to handle, quickly.

With that in mind, knowledge is key. The more information available, the more informed the decisions that can be made. And so, the main Wednesday session at the Association of Municipalities of Ontario conference was focused on cannabis. Chaired by Mark Taylor, Deputy Mayor of the City of Ottawa, six key individuals were brought in to give municipalities a broader understanding of how to proceed. Panelists included: Renu Kulendran, Ontario Ministry of the Attorney General; David Mitchell, Ontario Ministry of Children, Community, and Social Services; Nicole Stewart, Ontario Ministry of Finance; Bryan Larkin, Waterloo Region Police Services; Joy Hulton, Regional Municipality of York; and Ray Callery, Greater Napanee.

The presentations had three key focuses: provincial government priorities, particularly around consultation and youth; the regulatory environment, including around sales and policing/enforcement; and important connected issues that municipalities need to think about as they contemplate local impacts in their communities.

With three high-ranking members of the Ontario government from different ministries, there was an opportunity to get a clear understanding of where the new provincial government stands. The presentations began with Renu Kulendran, who gave some oversight and introductory notes on the federal regulations, outlining the various authorities of the provincial and federal governments. As noted, provinces have some leeway in developing their own rules and regulations around the issue. Ontario plans to have a minimum age of 19 (as opposed to a federal age of 18) and is putting rules in place with a key focus on protecting youth and keeping money out of the hands of organized crime. A number of campaigns are planned, designed to help householders make “informed decisions.”

The theme of youth safety and harm reduction was a critical theme throughout the presentations. David Mitchell cited research that showed that youth have a significantly higher incidence of marijuana usage compared with adults, and those youth who are already in trouble with various legal issues often have issues with marijuana as well. That said, the plan for the provincial government is to focus on what Mitchell called a “vector of change” and an emphasis on harm reduction – of note, there are several plans in place to help keep youth out of the criminal justice system, including plans for diversion programs and referral to special programs designed to improve education and prevention (see section 20 of the Cannabis Act, 2017 for more information).

Both the provincial and municipal speakers agree about the essential nature of consultation. Nicole Stewart from the Ministry of Finance made it a key priority to point out the position of the provincial government to consult with municipalities on the issue of sales – including the recently-announced, one-time opportunity for municipalities to opt out of having bricks and mortar stores in their community. But, from the municipal perspective, consultation needs to go much further.

The issue of regulation comes in a number of different perspectives – the most public being the pending sales. Reversing a decision from the previous provincial government, plans are now in place for the sale of marijuana in private dispensaries, while online marijuana sales will be through the Ontario Cannabis store. There are several regulations that will be required for sale, including those mentioned above, but also related to licensed producers (of which the Ontario government just announced 26), packaging requirements, other sales requirements, delivery requirements, etc. The issue of whether municipalities will allow for opt out is one that is of relative urgency – it was called a “first order of business” issue for council by the provincial panelists.

Of note, it’s not just the planned regulations, but what municipalities and police are asking for regulations on that were are specific topic of discussion. On the policing side, despite just moving to an incredibly stringent impaired driving regulation, police are hoping for increased powers in the name of public safety. There also needs to be clarity on rule enforcement (an issue echoed by all the municipal speakers), and there is hope for some provisions that mirror the Liquor License Act. How enforcement of regulations work in grey areas is also incredibly challenging – for example, temporary residences such as houseboats and even sleeping in truck beds at campsites, among other things. Without further clarity from the provincial government, municipalities will be expected to go it alone, and that is a scary proposition. As Joy Hulton asked: “Without any regulations to prescribe a framework, what is it we’re enforcing?” That is to say nothing about regulation issues that are expected to be on the horizon soon; the federal government has plans for legalization of cannabis edibles by October 2019, and there are questions related to the development of public consumption spaces, similar to what exist in other jurisdictions.

Meanwhile, from a policing perspective, Bryan Larkin (speaking on behalf of the Ontario Association of Chiefs of Police) urged municipalities to help adopt a model based on prevention based on the impacts that it might have on young people. Likewise, the legal sale will have several safeguards for the protection of youth – including age verification before sale and receipt, identification, and signature requirements, as well as restrictions on visibility, advertising, and marketing.

Joy Hulton accurately noted that there are several gaps that remain – municipalities are the ones that are going to be impacted by the legislation, and still lack details around issues related to enforcement. For example, the pause in the Smoke Free Ontario Act poses challenges to municipalities and more uncertainty. Ray Callery echoed those themes in his presentation – information around the specifics of zoning, of issues like waste management, of issues like licensing – the devil is in the details, and municipalities do not have all the details yet. Until there is further clarification and guidance from the province, municipalities will continue to face significant issues.

Whatever comes, learning from other jurisdictions is going to be key. Nicole Stewart pointed to the value in looking to other jurisdictions – particularly the prairie provinces – as a guide to developing practices around regulating the sale of cannabis, while Joy Hulton drew on her experiences in conversation with American municipalities to suggest the value of developing stringent regulations first and then loosening them as the issues become normalized in the community.

Ray Callery was probably the most succinct about the challenge for municipalities when he asked “what are the tiny implications we aren’t thinking about currently?” (See the interview with Ray Callery in the Municipal World Media Centre.) At this stage, less than two months before legalization, there are still so many unknowns and so many issues that municipalities struggle to grapple with.

One of the topics that was addressed by all three municipal presenters was the issue of enforcement at the municipal level. There are going to be issues that are strictly municipal jurisdiction and issues that are going to be police jurisdiction. Not every case can be handed directly to the police – even though in some cases, police have better powers and access to information to handle some of the key challenges that arise. Strong, detailed by-laws that are specific are going to be needed – and even that remains a challenge. How much is it going to cost to enforce a zoning by-law? And, as a corollary, what benefits are you going to get out of it? Odour by-laws aren’t going to be helpful in all likelihood; are your nuisance by-laws? Who is going to inspect sites? These and other questions about by-law enforcement remain to be seen – and it’s going to be a struggle for municipalities as implementation begins. In most cases, there simply aren’t enough staff hours to dedicate to these important issues – and that’s something that likely can be said of multiple orders of government. While there is going to be money available – the provincial government is making money available to all municipalities for enforcement, and there will be fine revenue, municipal budgets are already stretched and this represents a potentially huge drain.

While most municipalities have thought about things related to enforcement, what of human resources? It’s not just about whether and when municipal employees can smoke, but what about work refusals due to mould when inspecting a grow op? What about waste management – jurisdictions in the states consider marijuana by-products to be hazardous waste – are you ready to deal with this? What of transporting garbage to areas where marijuana is currently a banned substance? Are we prepared for the fallout from that?

As Renu Kulendran noted, the impending legalization of marijuana is going to be a multi-year, iterative process. All orders of government are going to have to learn – not just from the challenges that exist today, but challenges that develop as they unfold, and even issues we haven’t thought of yet. We don’t have all the answers, but that doesn’t meant that we can’t ask the questions.

While Joy Hulton listed nine key areas for municipalities, it wasn’t meant to be an exhaustive list. Ray Callery suggested it was important to go through your organizational chart, line by line, considering what the impacts might be. It represents a tedious process, but would be much better done now than later.

Finally, as Bryan Larkin noted, “we have the perfect storm” – but it represents a significant opportunity for collaboration. Take the opportunity to reach out to all the stakeholders, work with other municipalities to find solutions, and learn. Your community will thank you.